by The Teller
in UFO & Aliens
0

Conspiracy theorists all across the world strongly believe that the US military is conducting experiments with the help of aliens in Area 51. Adding up the heat to these seemingly unbelievable theories, Scott C Waring, a UFO hunter who is operating from Taiwan has claimed to have discovered underground bases and mysterious entrances in the military site.

In his recent website post, Waring revealed that he has made this discovery using Google Earth. The self-styled researcher also shared the coordinates where these entrances can be spotted.

“I was using Google Earth map at Area 51 when I came across an underground base. This base has three entrances, one large 18 meters by 9 meters. And Two other smaller ones. There are air ventilation pipes coming out of the largest one and two pipes coming out of the top of the hill,” wrote Waring on his website UFO Sightings Daily.

He also added that aliens might be working closely with the US military in Area 51. Waring revealed that these entrances are located just kilometres away from a place where he discovered a UFO parked on a runway.

“I really am thinking about those tall white aliens that Charles Hall said he worked with behind Nellis AFB. Because this is behind Nellis…same military land, and it is behind a firing rage of sorts…where hundreds of bombs were tested underground leaving only crater reminders. This could be…the tall whites military entrance to their base,” added Waring.
Waring’s video gone viral

After making this discovery, Waring also posted a video on YouTube detailing this finding. Most of the viewers who watched the video claimed that something sinister is going on in Area 51, and they lauded Waring for making such mindblowing alien discoveries. However, some people claimed that secret underground settlements are very common in military bases. 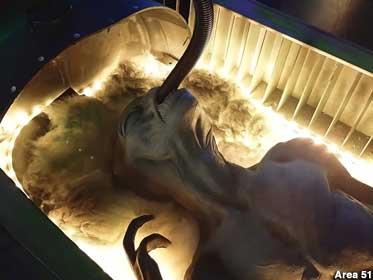 “Tall Whites? … You mean Pleiadians? They look just like humans… there are no exotic ‘tall whites’,” commented Mike Cox, a YouTube user.

“It isn’t especially exciting to find an underground facility at a top-secret military testing base. It is to be expected surely?” commented Steven Homan, another YouTuber.

The “Night Of The Ufos” In Brazil: When Fighter Jets Chased Impossible Objects

“GRAY” ALIEN Captured by Surveillance Camera in the United States

A Saucer-Shaped UFO Was Captured In Missouri During A Thunderstorm Gathering Lightning.

This Is The Unidentified Flying Object That Forced The Closure Of A Major Airport In China.

The 800-Year-Old Mummy Has Shocked The Scientific World!

A Strange 2,000-Year-Old Skeleton Of A “Laughing Man” Is Discovered By A Farmer.